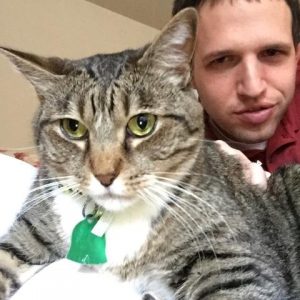 On November 28, 2017 my wife and I had to make the decision to put our cat to sleep.  It was a hard decision to make as he was for the most part healthy except for one thing; he may have had a brain tumor.

It all started on November 16, 2017.  I came home to find that Ginsberg, our cat, with one dilated pupil and one normal pupil.  Not knowing what this meant I searched the internet and came across what is known as anisocoria.  With the information we gathered from the internet we determined that it was best to go take him to the vet as it could be a variety of things. 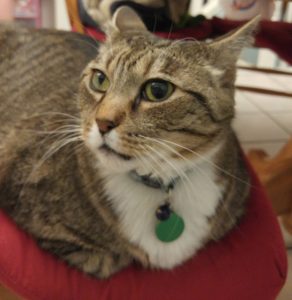 Now, Ginsberg has never liked going anywhere in the car and he howled the whole way there.  After we arrived at the vet, he was happy to get out of the carrier but unhappy to be at the vet and curled up between the examination table and the bench. A while later, the vet came in and did the standard checkup and confirmed it was anisocoria. After that, Ginsberg was checked for glaucoma and a stroke; both were negative.  Unfortunately, we were left with the possibility of a tumor.

Dr. Moss, the vet, told us we could have a CAT scan done at another vet but would be pricey and may incur additional cost to have a radiologist review it if he was unable to read it.  We chose to not do the CAT scan because of price and the fact that even if we did find a tumor there would not be much we could do.  We could medicate but from what we read is that their life expectancy is short if they have one and it would probably continue to get worse.

Now, the tumor was not a sure thing even though there was a high probability.  The advice of Dr. Moss was to take him back home and see if it would get better over the next few days. 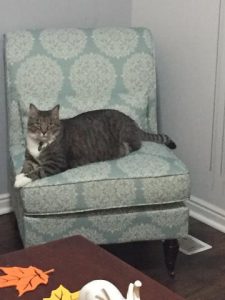 After the vet visit we, of course, took him back home again.  I was happy that he may recover from whatever might have happened to him and for the first couple days it looked like he would.  His pupil returned to normal and he was being himself again.  Then what I feared came true; his inner eyelid started to cover his eye.
I tried to hold on to hope by waiting an additional day and telling myself that it might get better.  To our dismay it appeared that it was not going to get better and may be getting worse.  That’s when we made the extremely difficult decision to have him put to sleep.

Back to the Vet

So, I called the vet to have Ginsberg put down and an appointment was made to do so at 4:30PM.  The remainder of the day was very hard on both me and my wife; we were not ready for him to leave our lives yet.  We spent the time before the vet visit giving him some of his favorites: catnip, milk, tuna, and temptations treats. He did not touch the milk and left some tuna behind, which is not like him.  We also tried to let him go outside, another one of his favorites, but he just stood on the patio for a minute and came back in.

Finally, the time came to take him back to the vet.  This time was an unpleasant ride for all of us.  I was sad, my wife was sad, and Ginsberg was nervously panting and howling.  We arrived at the vet and went in the side door into the euthanasia room where we waited a bit with Ginsberg.  He initially hid under the bench until the doctor came in and we pulled him out.

Dr. Moss spent some time with us evaluating his health and went over one last option; we could try and treat an eye infection.  He warned us that the probably of a tumor was high, impossible to know without a CAT scan, and that the medication might not work. He also reminded us that if the medication did not work we would be in the same boat and going through the same emotions again.  It was a difficult decision, my heart said try the medication and my brain said, considering the probability, to put him down.

We had some time to decide what we wanted to do while the vet stepped out.  In that moment, we decided to put him down and my wife hugged him so hard he seemed to know he was loved and lost his fear of the vet.  Dr. Moss came back to confirm our decision. So, Ginsberg was given a tranquilizer and he was held in the arms of my mother-in-law, who owned him first, for the few minutes it took to set in.  He was placed on the table and given his last injection letting him cross The Rainbow Bridge.

I have since wondered if we should have tried to treat an eye infection and searched the internet about putting a pet down too soon and the consensus seems to be that it is better too early then too late.  Looking a pictures with cats with tumors I am glad that Ginsberg will never have it get to that stage but sad that my buddy is gone.  It is hard for us because he is missing in his favorite places. However,  I am fond of the memories and short time we had together and he will always hold a place in my heart.  I will miss you Ginsberg.