It’s that dreaded time of the year again, tax time.  Most of us do not like doing taxes, however, there is software that does make the job a little easier.  The problem with some is that they can cost quite a bit of money.  Yet, there is one solution that stands out for being completely free no matter what your tax situation is.  Enter Credit Karma Tax.

Now, I tried using Credit Karma Tax last year and for the most part it was good.  There were a few things that made it a no-go for me last year.

First, I had a bit of a weird situation where both me and my wife had qualified HSA distributions from separate accounts.  The interface was a bit confusing as there were two parts to the HSA accounts located in different places but it was still doable.  The problem came when it came to the second HSA.  Credit Karma would not apply the correct calculation to get it to zero out for qualified medical expenses.  It seemed to put all qualified distributions on the first HSA account no matter what I did.

Second, I did not expect support but I figured if there was a bug support could at least pass it along to be fixed.  I was wrong.  Support when told the exact error would only tell me to do the same things I had done over and over and would never give it to their development team.  The bug was so big I would have lost several hundred dollars so I opted to use TurboTax instead.

Now that Credit Karma Tax is a year old I decided to give it another go.  I signed in to my account and it asked if I wanted to use the information from last year or start anew.  I choose to start over because I never finished last year.  My wife and I also had to digitally sign a short agreement, required by law, before we began.  It started out in an interview format asking to enter information about my wife and myself.  I did not have my spouse’s social security number at the time so I choose to add her and her W-2 later. 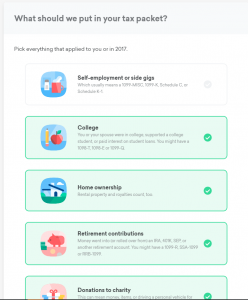 After I entered my information, I was taken to a screen where I could enter the items that I may need for my tax situation.  I choose college, home ownership, retirement contributions, donations to charity, and investment income.  Upon completing that really easy step, I was taken to what Credit Karma Tax calls My Tax Packet.  It showed my current expected refund as I had entered as well as the ability to add a spouse, dependent, or another W-2.

Now, since I did not have my wife’s social security number I had to go back and add her details later.  It was easy to go back, all I had to do was click on the add spouse and add W-2 buttons.  Adding this second W-2 let me see some things that I missed before.  For example, my wife’s W-2 brought up that they may be able to import it via Equifax.  This failed.  There was an option to upload a W-2 to the site for auto-fill but this also did not work.  I am unsure of the upload system because my wife’s W-2 looks different than most W-2’s I have seen so it might work better with others. 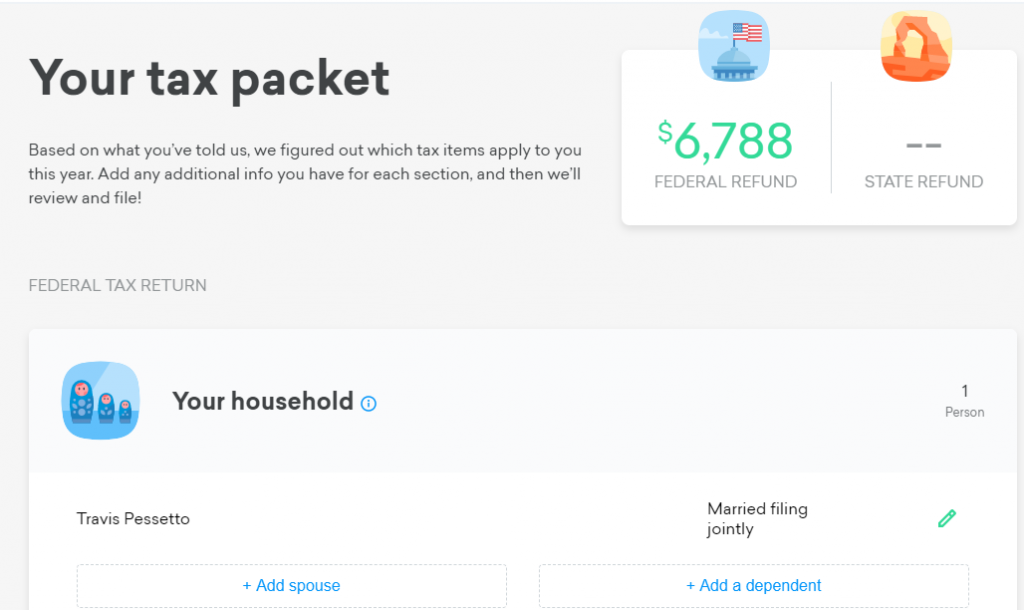 Moving on to Healthcare

To move on to the next section I had to scroll down the page a slight bit and select my section I wanted to work on.  I chose healthcare.  I was asked the basic questions including if everyone in my household had health insurance for 2017 and if I purchased my coverage through the government marketplace.  Since I did have healthcare for all of 2017 and I did not purchase it through the government marketplace that is all I was asked.

It has been a couple years since I graduated college; so, I do not have any education credits.  However, I do have student loan interest.  I was presented with these on the same page.  For some this may be confusing as you may have to determine if these fit you or not.  Apparently, the education credit section (1098-T) is where you will find areas to input details about the Hope Scholarship, American Opportunity Credit, and Lifetime Learning Credit. 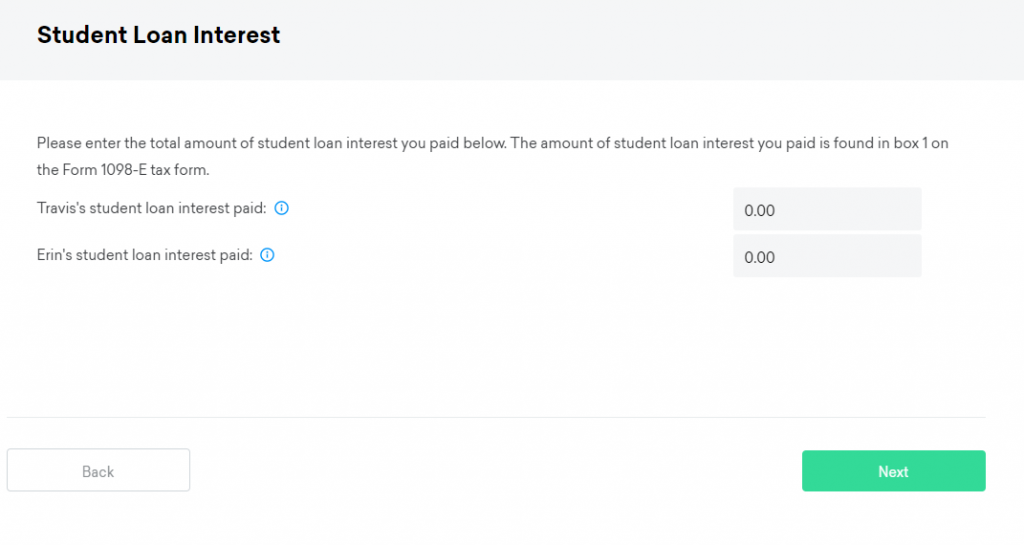 The student loan interest section was easy.  All I did was insert the loan interest for wife and myself.  That really was all there was to that section.

I have tax situation that is not two uncommon, that is I have two mortgages.   When it came time to input them I noticed that it only had fields for one 1098 (so to speak).  So, in this case I had to add the mortgage interest from both and sum them together.  It was not really that hard but it was an extra step and could have introduced more errors.

When it came to property taxes paid it was quite a bit easier.  Since I only have the one property all I had to do was to enter that into the field.

I do not do a whole lot of investing outside of my 401K.  However, the little that I do with Prosper did become a bit of a problem.  So, Credit Karma Tax says it supports 1099-OID but I was unable to find it anywhere on their menu.  Ergo, I had to contact support (which I will touch on later).  In the end support gave me a link to the 1099-INT form and it looks like if you are careful when matching values it works just fine in place of the 1099-OID on form 1040 when compared with TaxHawk.  While this may be the way to do it, I am not a tax expert so do not rely on my advice.

As mentioned earlier, I had to contact support.  I was pleasantly surprised to find that this year Credit Karma Tax had a live chat support option.  So, I tried it for two reasons.  First, to see where to put my 1099-OID and second, to see why my federal tax withheld was $1 more than expected.

When it came to the 1099-OID live support did not seem to understand what I was saying and sent me to these instructions, which did not help much.  After a bit longer they said they would get back to me by email.  The initial response came a couple of hours later; it was just to verify information.  The next day I finally got my answer with the link to the 1099-INT.

Now, I mentioned I had to contact support twice.  Credit Karma Tax decided itemized was best and while checking against Tax Hawk I noticed a $1 discrepancy on federal tax withheld.  I contacted support again and found chat could not help me.  They advised I check the values, which I did, and it still had issues.  I even copied and pasted from Tax Hawk.  They sent me to email again and at this time I am still waiting for an update.

Overall, I can say their support is significantly better than last year but could still use some work.

When talking about support, I mentioned a $1 discrepancy and this was the only thing I found wrong in the software.  This bug seems to have been fixed (even though support did not mention anything). So, it seems like it is a pretty safe system to go with but look out for a few bugs.